Hinduism is India's religion with the largest following. It's the world's third largest religion, following Christianity and Islam. Roughly one billion people in the world follow the Hindu faith and about nine-hundred and five million of them live in India. The religion's roots trace back thousands of years to India's Iron Age; for this reason, the Hindu faith is often referred to as the oldest living religion.

This religion is also called Sanatana Dharma by Hindus, which means "the eternal law" in the language of Sanskrit. The religion is really a collection of different religious beliefs, rituals and traditions that developed and were unified through India's history.

In the Indus Valley Civilizations of ancient India, the religion began as an ancient religion called Brahmanism. Brahmanism got its name from with the Brahman priests that were the leaders of these civilizations.

However, the Hindu faith has no credited founder because there is no specific belief system to be credited. The Hindu faith truly is a collection of teachings, rituals, traditions and philosophical beliefs that were born throughout India. Its followers may choose to follow particular branches of the various Hindu teachings and rituals, while choosing to pay no mind to others whatsoever, and this is all perfectly acceptable.

There are many Gods available for worship in the Hinduism, but Hindus may choose to worship only one god, or multiple Gods. Some forms of the Hindu Religion recognize a primary god and view all other Hindu gods and goddesses as manifestations of that supreme god.

The religion consists of many religious texts. These texts are divided into two simple categories called Sruti ("revealed") and Smriti ("remembered"). These scriptures discuss philosophy, mythology, theology and the provide instructions for followers to practice Dharma.

Dharma is the practice of living ethically through religious life-philosophies. Hindus believe in reincarnation, or being born again and again. If you are a Hindu, your ultimate goal is to break this cycle and to finish your last life, which is called reaching Nirvana. If you follow the laws of Dharmic living, you may reach Nirvana. 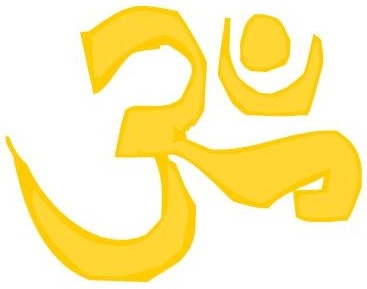 The Om is the symbol that is most often used to represent the Hindu faith. It's also the sound spoken or sung at the beginning and ending of most Hindu prayers.

The two most important of the ancient writings are the Vedas and the Upanishads. These are the oldest and the most important of all the Hindu texts because they represent the beginning of the religion and the Sanskrit language that was developed in Ancient India. Additional important scriptures include the Puranas and the epics of Mahabharata and Ramayana; these are all important teachings and Hindu stories.

Hinduism originally got its name from the Persian word "Hindu", which means Indus River, where the first Indian civilizations began, also known as the Indus Valley Civilizations. The British introduced the word Hinduism to name the religious, cultural and philosophical sides of India.

Hindu people follow its teachings by adhering to prominent beliefs. The concepts of Karma (the cyclic reaction to one's positive or negative actions in each life they live), Dharma (practices for living ethically in order to eventually stop being reincarnated), Samsara (The ongoing circle of birth, life, death and re-birth), Moksha (freedom from Samsara, and the Yogas (paths or practices) support the belief system of the Hindus.

Again, your ultimate goal as a Hindu is to achieve Moksha, so that your soul can be free from repeating the birth, life, death and re-birth cycle.

It's considered to be the world's most complex religion and has inspired the creation of Jainism and Buddhism. In the Hindu belief, God is complicated and the concept of God differs based upon an individual's particular religious traditions. Hinduism is not the only religion practiced in India; there are many other India religions.

Leave Hinduism to discover the other religions practiced in India.