You can trace Ancient India religion back about 5,000 years. During ancient India history, the first men and women emerged to create simple societies near India's Indus River. India’s first religion is thought to have developed in a civilization known as Harappa. From the beginning of its ancient culture, religion was important to the people of India. As social groups emerged, they developed interpersonal relationships between their society members and those of other Indus Valley Civilizations. As with any society, a belief system to teach members right from wrong was needed and the concept of dharma was created.

Dharma is the concept that after death, you're re-born into the world as a new form. It's the concept that life is a repeating cycle based on your Karma. Karma is the belief that your actions have direct repercussions. Within dharma, this concept means your actions will effect your rebirth status in your next life. For example, if you lived a righteous and just life, you would likely have been reborn as a man, lion, or ther noble creature, but if you lived a dishonest and selfish life, you might be reborn as a cockroach.

A common goal within dharma is to break the rebirth cycle by achieving Nirvana. Nirvana means you lived such a virtuous life that you are no longer forced by the gods to be reborn in order to attempt living a better life. If you reach Nirvana, you free yourself from the rebirth cycle and your soul is released from the earth.

Now that we laid the basic foundation for dharma, karma and nirvana, let's get back to ancient India religion!

Early religion was created to build order and understanding among early man, to teach right from wrong and to help man make sense out of life and happenings that they witnessed in nature. Religion was simpler than it is today because it did not require worship temples or structured ceremonies and rituals, at least not at first. People prayed and worshiped where they pleased. 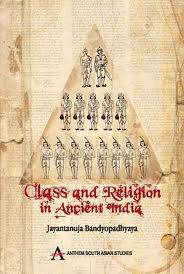 Artifacts recovered from Harappa revealed people worshiped phallic animal and human representations of gods, but mostly prayed to a motherly goddess. Symbols of her were discovered in ruins of homes where people lived. Ancient religion seemed to include the belief that cleanliness was next to godliness because people of Harappa and Mohenjo Daro built sewer systems to move wastes away from where they lived.

Early religious concepts developed and evolved into a more complex religion structured around dharma upon the arrival of some Aryan nomads! Indo-Aryans invaded and dominated the Indus Valley Civilizations. They developed and implemented a new religion known as Brahmanism. It was Brahmanism after the priest who fronted the religious movement, known as the Brahmans. These priests developed several collections of sacred ancient writings to support Brahmanism.

The Vedas were considered so important to ancient India religion that this time period is referred to as the Vedic Era. Originally, they were only read and shared from one generation of Brahmans to the next. Later, they were re-written in Sanskrit near the end of the third century BC and renamed the Samhitas.

They were broken into four major parts called the Rig-Veda, the Sama-Veda, the Yajur-Veda, and the Atharva-Veda. The Samhitas were used as guides for priests to conduct rituals, included hymns, and instructed how to lead prayers to the gods. An assortment of gods were praised in the Samhitas. A god called Indra was most frequently mentioned in the writings. Indra was the god of weather and conflict. Agni was another; mentioned as the god of fire. These two gods directed teachings to society's higher class members and lost resonance among most society members.

Some writings from the Vedas were better directed towards the general public. The Atharva-Veda, included references to gods that watched over the lives of common man and so the writing was more relevant to most people. The Aryan people implemented a social caste system and a division of labor based on class hierarchy. The caste system put into place by the Aryans has always been controversial and really wasn’t socially abolished until Gandhi fought for the equality of all Indian people hundreds and hundreds of years later. Ancient India religion placed power with the priests and rulers and clearly divided social class.

Brahmanism developed into Hinduism. Because the Hindu religion created an unfair social system, the religions ofBuddhism and Jainism later emerged and offered people an alternative religion to Hinduism. These religions gave people of all classes an opportunity to worship on a more equal level, although women still did not have the rights of men. The key element here was that Jainism and Buddhism were each created from choice teachings and concepts of Hinduism.

India culture today has changed from what it was then and, now, many religions are practiced in India.