The people of the Indus Valley Civilizations lived simple lives, worked with metal, developed their own form of writing and shaped the history of ancient India. Somewhere between 2600 and 1900 BC, they developed useful stone tools, such as axes and spears. This era of invention in ancient India history is known as the Bronze age. India's ancient culture quickly developed.

Between 2000 and 1500 BC, Aryan people migrated into the Indus Valley Civilizations and dominated the social structure of the the indigenous people. They implemented social structures that included a hierarchy, known today as India's Caste System. They brought organized forms of religion with them. Prior to their arrival, tribes primarily worshiped a Sun God and celebrated nature. These Aryan priests were a powerful group of people in the history of ancient India. These priests, referred to as Bramhanas, were self-proclaimed and held the highest status in the new social hierarchy. This change to the previous simple social structure greatly influenced the culture and history of ancient India.

The era in which this hybrid culture emerged is referred to as the Vedic Age, or Iron Age. The Aryan people and indigenous people had socially merged into one culture. This era was a time of discovery and artistic creativity in ancient India history. People drew symbols and gave them an understood meaning. Music and dance developed during this age, and the popular religion known as Hinduism was born. 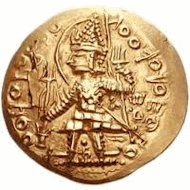 Essentially, Brahmanism developed into Hinduism and sacred texts were written in the ancient language of Sanskrit emerged during the history of ancient India. Because this took place so long ago, Hinduism is known as being the oldest surviving religion practiced today!

Religion in India developed further during the history of ancient India when the Vedic Age began. Here religious belief systems, called Mahajanapadras, emerged in various areas of India. Some of the most prominent early religions include Magadha; its basic principles eventually lead to the creation of two of India's popular religions of Jainism and Buddhism.

The history of ancient India includes the rule of massive empires. Between 381 and 185 BC, almost all of India was under the rule of an empire called the Maurya Empire. The dominating Mauryan Empire was powerful and emerged directly from the Magadha religion, which later formed into Jainism and Buddhism. Alexander the Great left India during this time period, and his battles left many areas of India weak; the Mauryan Empire took advantage of these distressed areas. The Maurya Empire was the world's largest empire during its rule!

Eventually, the Mauryan Empire became so large that it could not rule its entire conquered territory, and so its reign over ancient India history came to an end. The empire basically fragmented into many smaller self-governed states called Middle Kingdoms. Things stayed this way for the next 1500 years and this time period was known as India's Classical period. This was an era where India saw little conflict, and had the largest economy of the ancient and medieval world; that's not the case today.

In the fourth century of the history of ancient India, most of the country was united under empire the Gupta Empire. The Gupta Empire's rule is also known as the Golden Age. During the Gupta Age, people began to truly value the importance of intellect and religious ideas. For the next several hundred years, this philosophy trickled into Southern India too.

The Chalukyas, Cholas, Pallavas, and the Pandyas were all rulers of regions of South India. During their rule, Indian civilization, administrative ideas, culture, and the religions of Hinduism and Buddhism spread to other countries in Asia. This is where ancient India history ends and the page in the history book concludes and we turn the page to discover Medieval India History.

Visit our homepage to discover more of India

If you like our site and want to create your own around your favorite topic, check this out!