India is the world's seventh largest country with a massive area of 1,269,219 sq miles. It measures 1,997 miles from north to south, and 1,860 miles from east to west. The perimeter of India's coast alone measures an astounding 4,671 miles. Approximately the lower two-thirds of India is surrounded by bodies of water. These importantbodies of water and water systems of India have enabled it to sustain an enormous amount of life.

One of the amazing facts about India is that it holds the world's second largest population, following China. Recent census research shows India will soon surpass China as the world's most populated country. India's land geography includes the Himalayan Mountain Range to the North, the Punjab Plains and the Thar Desert to the west, where India borders Pakistan.

The Chin and Kachin Hills lie in the far northeast of India, and the Khasi and Mizo hills are located in the Indo-Gangetic Plain, which runs East to West in the Northern. The Ganges river basically forms the Indo-Gangetic Plain. The Ganges-Brahmaputra River System runs through most of northern, eastern, and central India. Most of southern India is in a region called the Deccan Plateau, and the western portion is occupied by the Thar Desert.

The highest point in India is located in the Kashmir region, in a place called Gilgit-Baltistan. It's called K2 and it reaches 28,251 ft into the air. In addition to having an interesting geographic land layout, India's climate is also very unique. It ranges from hot equatorial conditions in the southern regions to alpine conditions in the Himalayas.

The geography of India played a major role in forming aspects of its culture and history. For example, people living in regions located closer to the ocean tend to eat more fish, than those located further away.

In addition, Indian people native to the more southern regions tend to have darker skin pigment than those native to the northern regions. This is in part due to the fact that during India's ancient history, the Aryans invaded India from the north and mixed culturally with these people in the Indus Valley Civilizations. 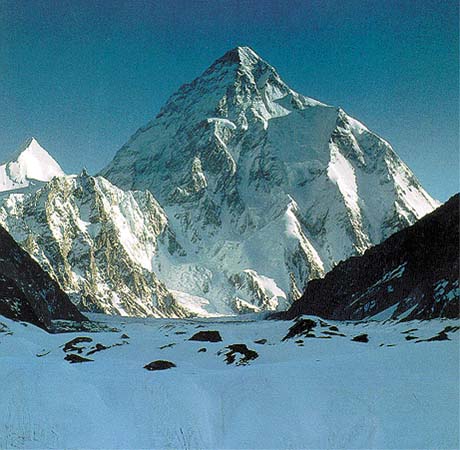 Above is a picture of K2, India's highest point!

During ancient times, these nomads traveled by foot and therefore could not enter India through the south because the south was surrounded by the oceans mentioned earlier. So, the north was their point of entry. It's clear that the geography of India had influence over the culture seen in India today.

Leave Geography of India to explore the states of India.