The Story of Gandhi

Gandhi is a very important person in Indian History and culture. He was a lawyer who became the leader and symbol of an entire nation. He's known for his non-violence resistance campaigns, which played a huge role in India gaining its independence from Britain, but his efforts first helped gain civil rights for Indians living in South Africa.

He was born in 1869, and he began his life in a little coastal town called Porbander, which is located in present day Gujarat. His full name is Mohandas Karamchand Gandhi. He grew up following the religion of Jainism and enjoyed learning about other religions, such as Hinduism, Islam, and Christianity.

He studied law in London, passed the British Bar, and tried to set up a law practice in Bombay. Things didn't work out, but in 1893, he was hired by an Indian firm as a Legal Adviser for their Durban office in South Africa; he moved to take the job. Upon arrival, he discovered South Africans treated Indian people poorly and that they considered Indian's inferior.

These ideas were inspired by the writings of Leo Tolstoy and Henry David Thoreau, who wrote "Civil Disobedience" and his inspiration also came from the teachings of Jesus Christ. Gandhi's actions were labelled civil disobedience. He didn't like this label and came up with the Sanskrit term Satyagraha, which means "truth and firmness."

During the Boer War of South Africa, he coordinated an ambulance corps for the British military and ran a Red Cross unit. After the war, he returned to fight for Indian rights in South Africa and founded Tolstoy Farm in 1910. Tolstoy Farms was a colony for Indian people.

In 1914, the South African government answered some of his demands: Indian marriages were now recognized and the poll tax was removed, which had unfairly targeted only Indian people. Gandhi moved back to India where he became an important leader in the campaign for India's independence from Britain.

Just after World War I, he advocated Satyagraha, in India and launched his campaign of non-violence against Great Britain. In 1919, British Parliament passed the Rowlatt Acts, which gave its colonial authorities emergency powers to forcefully control any revolutionary activities.

Satyagraha spread through India like a virus and gained millions of followers. The Indian people held demonstrations against the Rowlatt Acts. Many ended in the slaughter of Indians by British soldiers. Gandhi called for an organized campaign of non-cooperation. Indian children were pulled from schools, public figures resigned from office, courts were abandoned and streets were blocked by Indians who refused to move, even when beaten.

The British jailed him, but were forced to release him due to public demand and unrest. India gained economic independence from Britain in a movement he created called the Swaraj movement. Swaraj means "self governing" in the language of Sanskrit. This was significant because the British exploited Indians to the point of poverty, and had ruined their construction market and their economy. 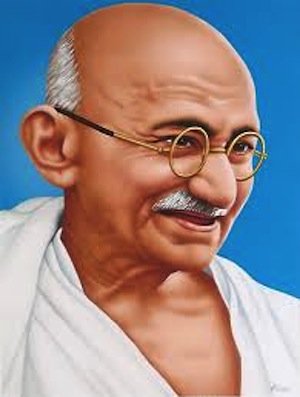 Gandhi advocated for a return to simple village life. He spoke of returning to the native Indian industries and promoted this by using a spinning wheel and incorporated it into designs for the Indian flag. He became the world's symbol of independent India and lived peacefully in prayer, fasting, and meditation and he refused earthly possessions. Gandhi wore nothing but a loincloth and shawl, ate only vegetables and fruit, and drank goat milk.

People of India considered him a saint and called him Mahatma, meaning "great souled". He believed in ahisma, non-violence, and thought it came directly from the teachings of the Hindu religion. He predicted Great Britain would eventually see that violence was useless and would leave India, which they eventually did. There was a group called the Indian National Congress that was in charge of the independence movement in India. They gave Gandhi full executive authority in 1921.

The Mahatma's non-violent attack on the British was hard for some Indian people to understand, and in result, there were violent revolts against the British during this era of modern Indian history. The violence got so bad that the Mahatma admitted failure to his movement; he was then jailed by the British. In 1924, he withdrew from politics to bring the community together, but he was soon drawn back into the fight for India's independence.

By 1930, Mahatma declared a campaign of civil disobedience by declaring that the Indian people should refuse to pay taxes on salt and other items. Thousands of Indians followed him from Ahmedabad to the Arabian Sea. Once there, they evaporated sea water and made their own salt. He was arrested for this, but released from custody in 1931. He halted his campaign after the British answered to some of his demands.

In 1932, he began a new civil-disobedience campaign against the British, was arrested again (of course), and fasted until the British let him out of jail. His fasting worked because the British didn't want him to starve to death, for fear that war would break out if he did.

In September of 1932, while still in jail, the Mahatma went into a "fast unto death" to try and improve the status of the Hindu lower class known as the Untouchables. Untouchables were the lowest members in the caste system and were treated with no respect. Although he was a member of a higher caste, the Mahatma felt it was wrong to treat fellow human beings as lesser souls.

In 1934 Gandhi resigned from politics, and was replaced by Jawaharlal Nehru, who later became India's first Prime Minister. The Mahatma traveled through India and taught ahimsa and protested for the demise of the social concept of "untouchables".

In 1939, he returned to politics to try and unite all of India into one federally organized nation. He famously fasted to force the ruler of the Indian state of Rajkot to cease his autocratic rule. Public unrest caused by the fast was so great that the British government intervened and his demands were met. The Mahatma was now considered the most important political figure in India.

Riots followed the partition of India and the Mahatma pleaded with Hindus and Muslims to live together peacefully, but riots engulfed areas like Calcutta, which is one of the largest cities in India. Gandhi fasted until the rioting stopped. On January 13, 1948 he fasted to bring peace to New Delhi; this was his last fast and last public action.

On January 30, he was assassinated while on on his way to his evening prayer by a Hindu Extremist. It is believed his assassination was carried out due to the assassin's disregard for the partition of India. Gandhi's death was an international catastrophe because his place in society and humanity was measured in history and spirituality.

The United Nations General Assembly recognized a period of morning and people of all countries expressed condolences for his passing. When religious violence occurs in India, Pakistan, or anywhere in the world, Gandhi's teachings have inspired non-violent measures towards peace. Dr. Martin Luther King and Nelson Mandela took inspiration from him.

This is why Gandhi is one of the world's most beloved heroes.

No doubt, Gandhi did a lot to influence the course of India's history. How do you think India would differ today if he had never been? Share your opinion now!

Here's What Other Community Members Have Shared.

Click here to view other visitor opinions on the matter.

Smile on Gandhi's face Not rated yet
Gandhi would have been happy to see prospering india today, but would be sad for his decedents haven't prospered as much.

God's Wishes Not rated yet
I believe every thing happens according to the god's wishes.

It would've changed India Drastically Not rated yet
I think Gandhi was a huge influence on India. Without him, our world would be different- badly different.

Gandhi rocks! Not rated yet
He's the man with the master plan. Just the total awesomeness of his being transcends so many different generations. "Be the change you want to see in …

India Would Be a Different Place! Not rated yet
I believe that without Gandhi's teachings, people in India, and around the world, might believe that fighting and violence are the only way to solve a …

Here's What Other Community Members Have Shared.

Click here to view other visitor opinions on the matter.

God's Wishes Not rated yet
I believe every thing happens according to the god's wishes.

It would've changed India Drastically Not rated yet
I think Gandhi was a huge influence on India. Without him, our world would be different- badly different.

Gandhi rocks! Not rated yet
He's the man with the master plan. Just the total awesomeness of his being transcends so many different generations. "Be the change you want to see in …

India Would Be a Different Place! Not rated yet
I believe that without Gandhi's teachings, people in India, and around the world, might believe that fighting and violence are the only way to solve a …

Leave Gandhi to explore India's culture. Discover what role he played in the creation of the flag of India!

Visit our homepage to continue exploring more of India.

If you like our site and want to build your own, check this out!