Chhattisgarh is located near the center of India and was formed on November 1st of 2000. It's India's tenth largest state and holds the capital of Raipur. Its bordering states are Madyra Pradesh, Uttar Pradesh, and Jharkhand to the north, Maharashtra to the west, Andhra Pradesh on the south and Orissa to the east. The topography of this state is that the north and south parts of this state are quite hilly, while the center of the state is a flat plain.

The language most spoken here is Chhattisgarhi, which is actually a dialect of Hindi. Both are recognized as the languages of the state. Roughly eighty percent of the people who live here reside in the rural areas, leaving approximately twenty percent residing in the cities. 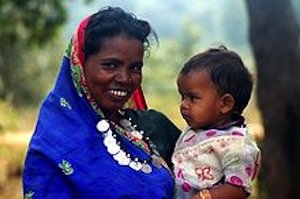 A pretty interesting characteristic to this state is that women far outnumber men. This is thought to be a collateral effect based on the culture which allows for women to take more control of their life. Women here can choose who they want to marry and can break off a marriage at will. While this may not sound very out of the ordinary to you, these customs are less likely to occur in most areas of India. Many shrines (areas of worship) in the area are related to the power of women!

Most men and women in the area marry before they are twenty, in many cases, when they are about fifteen years old. Another very interesting attribute to this state is that their is a widely followed belief here that women have supernatural powers, such as those normally associated with witches!

Women who are accused of possessing supernatural powers are at the very least humiliated and shunned from their villages, and some are beaten or murdered. Little has been done about this issue because people actually believe in witchcraft. This occurrence is very similar to what occurred in the Salem Witch Trials of the United States.

The most dominate forms of art made in Chhattisgarh are clothing made of silk, and art work made from wax. As with most any Indian states, folk dance and folk music are very important to the culture here. Theatre is also popular and utilizes folk music and dance for dramatic effect. When it comes to food, rice is a big deal here! This state is considered the rice bowl of India! Rice, rice flour and curd, along with vegetables grown locally, make up most of the meals eaten in this region.

More than ninety-five percent of those living in this state follow the religion of Hinduism. The only other religion with any real following here is Christianity. The state's estimated domestic gross product in 2004 was roughly twelve billion U.S. dollars, which was accumulated primarily through the sale of minerals. A very prominent metal producer called the Bhilai Steel Plant resides in the area, as does the National Power Corporation.

One of the best places to visit here is Chitrakot Falls! It is a gorgeous waterfall over rock ledge that empties into a sevene lake. If you visit, you will also enjoy lush green trees outlining he lake. In addition, visitors can view archaeological sites, caves, hot springs, beautiful carved temples, famous Buddhist sites, palaces and rare wildlife here. Destinations here less crowded than the well known India destinations, but are very beautiful.

Leave Chhattisgarh India to explore the other India states and union territories.

Discover more of India from our homepage!