India Family culture is fascinating because it's very different from standard western family culture. Family culture in India follows a patriarchal structure wherein generations of a family often live under the same roof. A patriarch is a family structure where the oldest male runs the house and calls the shots, even if he is retired, no longer a bread winner and of older age. Essentially, boys and girls are both taken care of by their parents from birth, and boys are often taken care of until they are well into their twenties. However, the system is different for girls, who can be married off before they reach their twenties. Once married, a woman typically moves out of their parents home and moves into the home of her spouses family.

In the case of boys, they grow up and are sent off to school, if their family can afford it, and hopefully are able to obtain a good job later. Once out of school, the boy is considered a man; he gets married and starts a family, but he and his family will live in the house with his parents.

Now, when this new family man's father retires, the home's deed is normally transferred to the son, and the son is now responsible for supporting his family and housing and feeding his father and mother. The older generation takes care of the younger, and then the younger generations repay the favor in turn. Different situations and factors may cause the tradition to change slightly on a case to case basis, and families residing in places like the United States may have adapted a more westernized culture. 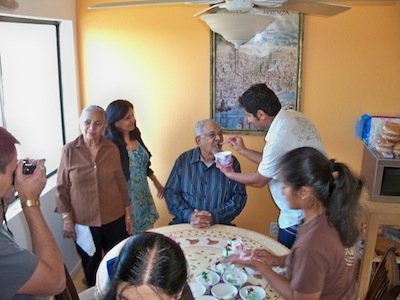 Sometimes a family has two or more sons, and these two sons own separate properties. My wife's father and his brother both live in the United States, and so does their father. In their case, their parents reached retirement and they now spend half of their time with each of their son's families. This way the burden of love is equally split and the entire family is better connected.

As briefly mentioned earlier, the big difference between boys and girls in India family culture is that when girls get married, they become part of their husband's household and live with his family. They are traditionally not required to take on the burden of supporting their parents when they rach old age. Instead, they are part of a new home in which their husband is responsible for his own parents. In cases where an Indian girl marries an Indian man in India and then moves to her spouses home in the United States, she may rarely, if ever, see her family.

The ancient culture of India probably influenced the family structure seen in India. People in ancient civilizations like Harappa, and other Indus Valley Civilizations began as tightly knit villages. In fact, the villages seem to have acted as large families in their own right.

Another possible factor for family adhesion may come from the Indian people's strong belief in Karma and the repeating cycle of life in general. Karma teaches people to treat others how they want to be treated because what goes around comes around. So, parents completely support their children, and when the time comes, the children support their parents. The idea of Karma is a vital part of the Hindu Religion.

Family, food, fun and socializing have always been a part of India family culture. India has become more similar to western countries, but has managed to keep many of its core traditions and values in place.