The famous Mehrangarh Fort is a top India tourism destinations. It's located in city of Jodhpur in the Indian state of Rajasthan. It's one of India's largest fortresses, and its name,'Mehran' means sun or Sun-deity; while 'garh' means fort in the ancient language of Sanskrit. The fort is located in the center of Jodhpur and spreads over 3.1 miles on a hill. Its walls, which are up to 118 ft high and 69 ft wide, protect some of the most beautiful and historic palaces in all of Rajasthan. The sun fort stands 400 feet above the rest of the city and is protected by thick, strong walls.

Rao Jodha was the fifteenth Rathore ruler. Jodha moved his capital to the current location of Jodhpur and had The foundation of the fort laid on a rocky hill on May 12, 1459. The hill where the fort was built was known as Bhaurcheeria, which means bird mountain. Legend has it that in order for him to build this fort, he forcefully moved a hermit, known as lord of birds, from the mountain and the hermit became upset and placed a curse on Jodha wherein his people would run out of water. To offset the curse, Jodha buried a holy man called Rajiya Bhambi alive in the foundation. Rajiya's family promised, that in return, his family would be looked after by the Rathores. To this day, Rajiya's descendants still live in Rajiya's Garden in Raj Bagh, which is an estate originated through Jodha. 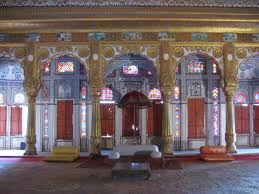 Although the fortress was originally started by Rao Jodha, most of the fort was built in the Jaswant Singh period of 1638 to 1678. Entry to the fort is gained though a series of gates. The most famous of the gates are: 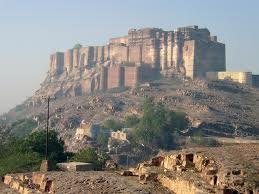 Jai Pol - The "Gate of Victory" was built by Maharaja Man Singh in 1806 to celebrate his victory in a war with Jaipur and Bikaner. Fateh Pol - Was built to celebrate a victory over the Mughals in 1707. Dedh Kamgra Pol - Was built for protection and still bears the damage from past cannonball attacks. Loha Pol - The final gate into the main portion of the fort complex. To the left of this gate are the hand prints of the ranis who immolated themselves on the funeral pyre of their husband, Maharaja Man Singh in 1843. 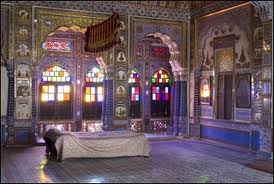 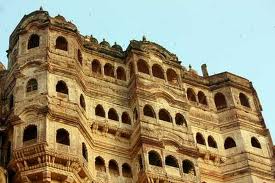 The palaces now make up the fortress museum, which has a collection of palanquins, howdahs, royal cradles, musical instruments, costumes and furniture. Palanquins are fancy chairs that normally seated royalty. They had handles to be carried by others, so that the person of importance could be lifted into the air. There are also several old cannons on display in the ramparts of the fort and breath-taking views of the city from the fortress.

The gilt Mahadol palanquin, which was won in a battle from the Governor of the state of Gujarat in 1730, can be seen in the museum. The museum shows the heritage and history of Rajasthan military clothing, costumes, paintings, palace furnishings and more. 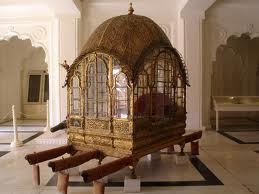 There are beautiful pieces of textile with mirror pieces woven into them. The mirror-work includes large, regular pieces, rather than the intricate mosaic of tiny fragments normally seen in Rajasthan artwork. The gallery displays one of the most important preserved collections of fine arts from the Mughal period in all of India History. This was the time period in which the Rathore rulers of Jodhpur maintained close links with the Mughal emperors. As described above, Mehrangarh is the history lover's dream India destination, with fortresses, palaces and museums all in one location!